I’m not really sure where to begin. It’s been one helluva year as far as they’re concerned. Two is just more hectic than one. Although the helluva hectic part is not really the Kat’s fault, but more largely due to her brother. To say that we are going through hell on earth with the Ginger at the moment doesn’t really come close to it! And to say that he is giving us a run for our money also doesn’t even come close to describing it!

I am led to believe that 4 is a very big year for a four year old and as a result it has been a very ‘Big Time‘ for us.
The Ginger is not sleeping and this led to some concerns over why and why the tears at school and why the massive separation anxiety. Having the ‘luxury’ of working from home, meant that the very obvious choice was for us to pull him out of aftercare and bring him home to spend the afternoon here.

This brings with it many challenges as he is totally not capable of spending time alone or without a constant sounding board or playmate. It didn’t help that for close on two years we were in rentals and didn’t have a safe playing area for him and so he was under constant supervision. Now that we have our own enclosed garden you would think he’d love the freedom of playing, but no its far easier to be with mom….. I know I should be flattered!
So it’s been challenging trying to get work done in the afternoons.

The sleeping or lack thereof…..who the blimming hell knows!?!?! Every now and then I try to figure it out but really we have no idea why he is not sleeping. We have cut his TV time, we have changed his diet, We have talked lovingly and no raised voices….you name it! One thing we did do that has improved the amount of waking’s to only 2 per night and definitely not as much hysterical crying is that we have left the bathroom light on and his door open.

About two weeks ago he begged to fall asleep in our bed and then we’d transfer him when we went to bed…. He asked me to put our walk in closet light on and leave the door open. So I left it ajar. When we went to fetch him the door was wide open and he was lights out. So I said to Daddy Abs let’s leave his door open and leave the bathroom light on. He has had a night light from small but it’s obviously dim and not enough light and it’s been like chalk and cheese! All I can say I long may it last….its been hell!!! 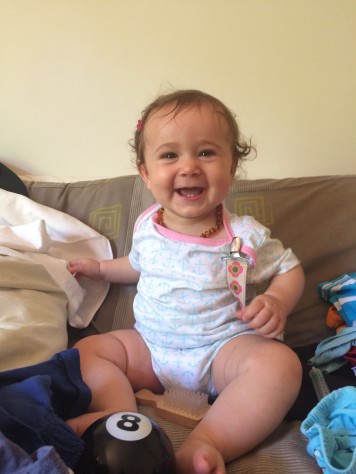 The Kat. She just gets on with it! She is busy cutting teeth and in fact slept through a couple nights whilst cutting her top 3! So yah she just keeps on amazing me with how chilled she is and I keep on expecting it to fall apart! She changes daily and in the past few weeks has learnt to clap her hands and also waves goodbye to everyone. It’s adorable. She’s also learnt to shout at her brother when he irritates her. She is desperately trying to crawl but can’t get over her rolls in the thighs. She’ll get there though.

She is all smiles and melts your heart……oh and has daddy totally wrapped around her baby finger.

Even though it’s been a stormy few months I’m just so completely blessed to have these two little people to call mine. And as tough as it is to work from home form the interruptions perspective, I am just loving being around to watch them grow. They are sprouting like weeds before my eyes and even though I’m exhausted and there are days I want to run away, I wouldn’t change this journey for anything!

2 comments on “The Kids”